The Toko digital audio player is equally at home with a conventional CD in its slot loaded transport or when connected to an Ethernet network, you can connect the Toko to your other DLNA compatible components, for example a P.C.

The quality CD slot loading transport used on the Toko is the same as that used in the Mauri CD player. When a CD is in the slot the Toko acts as a CD player and when it is ejected the Toko reverts to networked digital player mode.

When in networked player mode wireless or wired Ethernet communication is used for transmission of both music files and control signals. When using the CD player a traditional Plinius remote control can be used to control the CD functions, or if an approved remote IR blaster is in the room the remote control display on the Plinius Aratki app on an iPad can take over those functions.

With distinctive styling, benchmark build quality and stunning sound the Toko is a great addition to the other traditional components in your music system.

Popular files types such as FLAC, LPCM, AIFF, ALAC and MP3 are all catered for. Gapless Playback is also supported. 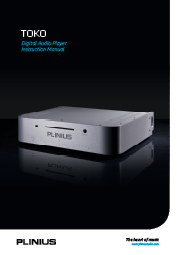 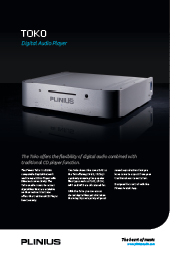 Network Input
The RJ45 connector allows network connection for playback of digital music over a home network. Network input was chosen as the most suitable way to transfer digital audio due to ease of setup, ability for wireless communication and advantages over S/PDIF and USB.

DLNA Compatible
By working within these guidelines the unit is capable of interfacing to a number of different home network devices.

Compact Disc Slot
Primarily designed as a network player, a compact disc transport is also on board to allow playback of standard CD’s

RC5 input
The RC5 input allows for connection to wired remote interfaces so it can be used as part of an automated system, or if it is required to be located out of the line of sight from a standard remote.

Auricap capacitors
Audience AV supply the Auricap XO capacitors used in key areas of the circuit. The Auricap was chosen for its superior clarity and dynamic ability.

Aluminium Construction
The aluminium chassis, lid and panels provide a non-magnetic housing to eliminate unwanted magnetic fields that can interfere with the sensitive audio signals.